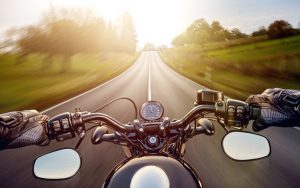 Spring is on its way and when the temperatures warm up a bit, more motorcycles will be on the road—and many will have seniors aboard. As motorcycle injury lawyers in O’Fallon, IL, we want to be sure you’re informed about the risks you might face.

Members of the baby boomer generation will be out on their Harleys and Yamahas, but much as they love cruising on their bikes, they must be aware of their vulnerability to serious injuries.

Looking at the numbers

Data collected by the Federal Highway Administration shows that the 8.4 million motorcycles that were on the road in 2014 ticked up to 8.6 million a year later. According to the American Automobile Association, motorcycle fatalities increased by 5.1 percent from 2015 to 2016, but the even more astonishing statistic was that fatalities among baby boomer riders rose more than 20 percent in that same time period.

No one can halt the passage of time, and older people have to deal with associated physiological problems. For example, eyesight will not be as sharp at age 60 as it was at age 30 and reflexes will be slower. The National Highway Traffic Safety Administration reports a simple fact: that seniors who ride motorcycles are more likely to die or suffer life-threatening injuries in a crash than their younger counterparts.

Some older motorcyclists have been riding since they were teenagers, and retirees have taken it up now that they finally have the time. However, safety is always a concern. In a collision caused by a car, the driver will often say that he or she “just didn’t see the motorcycle.” That is partly because motorists are programmed to see other cars and trucks, not smaller objects. Consequently, motorcyclists must always ride defensively, and safety experts encourage seniors to take training.

In the state of Illinois, compensation for motorcycle crash victims covers not only the medical expenses associated with injuries but also life care, disability, and pain and suffering. This is not something an older rider particularly wants to think about while enjoying spring cruising on the open road. But it is comforting to know that legal options are available if the unexpected should happen.

Lane splitting may harm you in more than one way

You probably ride a motorcycle for more than one reason. For example, not only does your bike...

Top 2 tips to avoid collisions on a motorcycle

Although the weather is cooler and the chances of snow are increasing, you may still have some...

Any motor vehicle accident can lead to serious injury. But in a motorcycle accident, you may be...