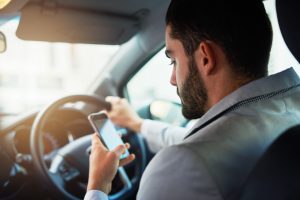 From talking and texting to sharing photos and videos, mobile phones have made it possible to stay in touch with family, friends and coworkers 24/7.

Unfortunately, many individuals are so used to reaching for their phones that they underestimate the risk of doing so while behind the wheel. As traffic injury lawyers in O’Fallon, IL we see it all the time. The Illinois State Police report that using a cell phone while driving increases the chance of a collision by 400%.

States across the country have begun enacting tougher distracted driving laws, and Illinois is no exception. In 2010 the state made it illegal to text while driving and, in 2014, banned cellphone use without a hands-free device. However, as of July 1, 2020, a new state law explicitly prohibits holding or touching any electronic device behind the wheel and enacts stricter penalties for those who do so.

Motorists who use devices while driving may face fines starting at $75 for a first-time offense, with penalties increasing by $25 for each subsequent violation and a maximum fine of $150. Drivers who violate the new law three times in one year may have their licenses suspended. Additionally, while the law previously considered this type of offense a nonmoving violation, on July 1, the use of a device while driving becomes a moving violation.

Exceptions to the new law

Under the new law, drivers may continue to use mobile devices in hands-free mode. However, Illinois motorists should know that it is illegal to use a cellphone within 500 feet of an emergency scene, within a construction zone or in a school zone — even when using hands-free mode.