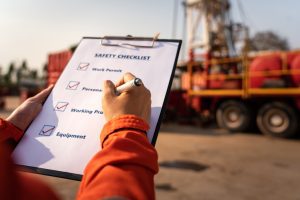 Recently we learned of a new guide created by United Steelworkers aimed at facilitating stop work authority in the hopes of making the working environment a more humane place to earn one’s living. As the preeminent workers compensation attorneys in St Clair County, IL we took notice.

It’s understood that dangerous work will probably always exist in America, however, this policy is a common sense approach to taking workplace safety seriously and allowing workers a more active role in creating a safe working environment.

What is Stop Work Authority?

Stop Work Authority empowers workers to halt unsafe conditions in their place of employment. Simply put this authority allows any employee to halt a job if a hazardous situation that may cause death or serious physical harm becomes apparent.

Examples of unsafe working conditions that would apply to a stop work authority policy would be anything that a worker considers “so hazardous that it presents a high likelihood of harm or impending action would lead to harm.”

Detractors may object to such policies out of the fear that relinquishing control of production to the workers on the front lines, might impact productivity, causing a culture of workers who refuse to work, however, the inverse seems to be true.

In a recent article published in Safety and Health Magazine, Michael Gentry, Vice President of a large environmental investigation company, Cascade Environmental, explains that not only is his company accepting the input of safety feedback from his workers on the ground, they are actually incentivizing them to engage their stop work authority when they encounter dangerous conditions.

This authority granted to employees is considered responsible and ethical by organizations who enact it. According to OSHA, unsafe working conditions are in violation of workers’ rights. Federal laws and the ability for workers to call rely upon the safety and health administration, file a complaint with OSHA or to request an OSHA inspection are important, however, allowing workers to immediately shut down processes to address occupational safety and health concerns has an immediate impact in ensuring a safe working environment.

There is a growing amount of information about Stop Work Authority on the internet. We encourage workers across America to discuss these policies with their union leadership.

Unfortunately in negotiations toward this kind of progressive, worker entrusted policy are often slow-going, and in the mean time workers will fear bringing up hazards out of fear that their employer retaliates or even just fear of letting their team down.

American workers are some of the most productive workers in the world and they deserve the representation and protections to their health and welfare. When an injury does occur in a work or industrial setting sometimes the only option they have to receive compensation and damages is by hiring a trusted workplace and industrial accident attorney. Call Kujawski and Associates to discuss your case: 618-622-3600 or Toll-Free 800-624-4571