What happens if your child gets injured on a school bus?

Home » What happens if your child gets injured on a school bus? 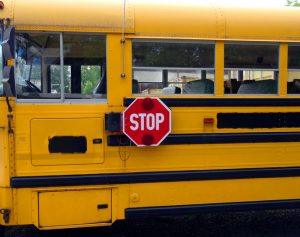 In early May of this year, a school bus with about 40 first-grade students on board was traveling down Illinois Route 133. Out of nowhere, an oncoming car veered into the bus’s lane. This resulted in what Shane Gould, president of Gould Bus Company, called “one of the worst crashes he has seen in decades.” Thankfully—and due in large part to the veteran bus driver’s quick reflexes—the most severe injury was a broken nose. But the situation could’ve been much worse. As school bus accident attorneys in O’Fallon, IL we wanted to inform you of the risks your child might encounter, and how to avoid them.

When you board your child onto a school bus, you’re putting their life in the hands of another person. In this case, the school bus driver was experienced and quick thinking. This is not always the case.

School bus accidents, by the numbers

The bad news is that traffic accidents involving school buses are fairly common. The good news: buses are built to withstand impact and protect their passengers, and traveling by bus is actually safer than traveling by car. But that doesn’t mean injuries don’t happen. Here are some important findings from the National Highway Traffic Safety Administration:

What happens if my child suffers a school bus injury?

If your child suffers an injury in a school bus accident, they may experience physical, psychological and emotional pain. They may need to take time off school, which could set them back. Their medical bills could add up. In addition, you might be forced to take time off work to care for your injured child, which would disrupt your income at a time when you may need it most.

Navigating this process can get complicated and overwhelming. If your child has suffered an injury, you’re already dealing with a lot. An experienced personal injury attorney can help you find you the justice you and your family deserve.