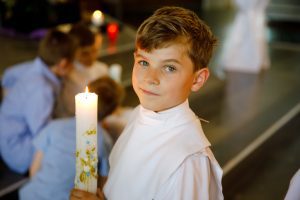 The Catholic Church’s Augustinian order settled a sexual abuse lawsuit brought by 11 survivors who claimed a Lawrence, Massachusetts, priest abused them during the 1970s. As sexual assault attorneys in O’Fallon, IL, we know how close to home this hits.

The Massachusetts church agreed to pay the plaintiffs – one man and 10 women – nearly $1.4 million after claiming Father John Gallagher sexually abused them when they were students at St. Mary’s School.

The 11 survivors, who are now in their 50s, say Gallagher abused them when they were 8 to 14 years old between 1974 and 1978. They say the abuse happened in the school’s gym and cafeteria, as well as the swimming pool of the Lawrence Reform School and the YMCA.

Gallagher was a swimming and basketball coach during his time at the school, and the survivors say the priest gave at least one child alcohol before the abuse began. Some were abused on many occasions over several years.

The priest was targeted in another lawsuit

The Catholic Church previously settled a claim against Gallagher brought by other survivors of sexual abuse. Three women, who said the priest abused them when they were children at the parish, received a $1 million settlement in 2018.

Gallagher died in 2006. The plaintiff’s attorney called the survivors “courageous” for pursuing action against the priest, who used his position of trust and authority for many years to abuse innocent children sexually. The attorney says the question remains why Gallagher’s supervisors allowed the abuse to continue.